Restoration of the European Oyster in the German North Sea: Establishment of a sustainable oyster seed production for a long-term restoration program

The European oyster Ostrea edulis, once a widespread native species in the North Sea, is considered functionally extinct in some regions due to intensive fishing. As an ecological key species, oysters provided several positive effects on other plant and animal species, as well as important ecological services to the ecosystem.

Currently in our ongoing project RESTORE, a pilot reef of the European oyster is under development. This reef works as a conservation measure, and is located at the German Natura 2000 site “Borkum Reef ground”. The pilot reef will be biologically and ecologically studied in the upcoming years.

A stable oyster seed production is a must for the successful restoration of the European oyster. To ensure long-term availability of juvenile oysters, PROCEED is contributing to the establishment of a technologically innovative hatchery at the AWI-Helgoland, which aims to rear a healthy broodstock and produce suitable oyster seeds. The final goal is to support a long-term restoration program through an adequate supply of oyster seeds, thus ensuring the conservation and enhancement of biodiversity through the development of an oyster reef habitat.

Complementary to research and production, an intensive knowledge transfer to society is done. The oyster reef is intended to work as example and to show the special and important role of ecological key species, as well as the significance of biodiversity and valuable ecosystem services:

As a biogenic reef builder, Ostrea edulis serves as a species of special responsibility. The biogenic oyster reef works as settlement substrate for flora and fauna growing on the reefs, and all of them are associated in a variety of ways. Oyster reefs, form a biodiversity hotspot and ensure important ecosystem services such as provide a living habitat, food and shelter for numerous invertebrates (such as sea clams and crabs) and diverse fish species. Thus, an intact oyster reef directly enhances the biodiversity of the ecosystem.

The PROCEED project is funded by the Federal Agency for Nature Conservation, BfN, with funds from the Federal Ministry for the Environment, BMU, as part of the Federal Program on Biological Diversity. 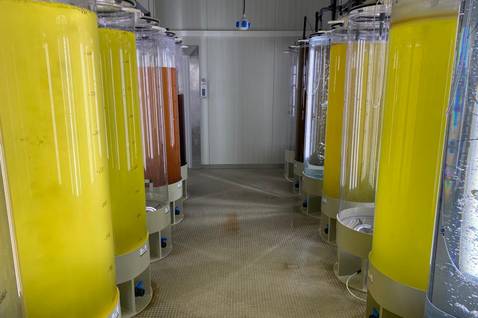 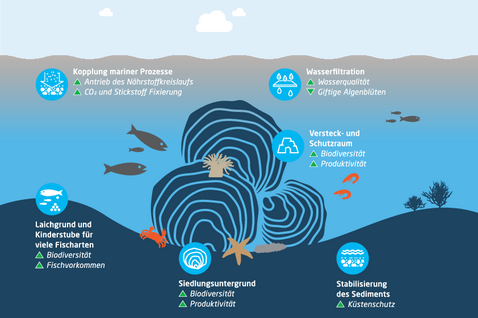