What is submarine permafrost?

Subsea permafrost in the Arctic is generally relict terrestrial permafrost, inundated after the last glaciation and now degrading under the overlying shelf sea. Permafrost may, however, also form when the sea is shallow, permitting sediment freezing through bottom-fast winter sea ice. Although maps based on observations exist for parts of the Canadian Beaufort Sea, we know little about the distribution of submarine permafrost for most of the shallow Arctic Shelf, over 80% of which lies offshore of Eastern Siberia. Degradation rates of the ice-bearing permafrost following inundation have been estimated to be 1 to 20 cm per year on the East Siberian Shelf and 1 to 4 cm per year in the Alaskan Beaufort Sea.


Why is it important?

We need to know more about the current distribution and state of permafrost beneath the ocean, about what cause sit thaw, where and how quickly. This group addresses key questions surrounding permafrost in its transition from onshore to offshore through coastline retreat and transgression, the evolution of permafrost beneath the sea floor, factors and processes determining the global distribution of submarine permafrost and the influence of future climate system changes on submarine permafrost. Key lines of inquiry include: 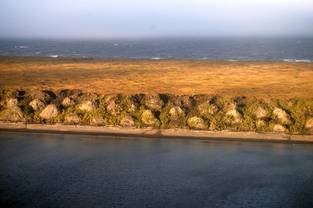 Find here some pictures of our expeditions