World climate and the Arctic

the USA will meet together at the Alfred Wegener Institute's Potsdam

centre for a workshop on comparing current computer models of the 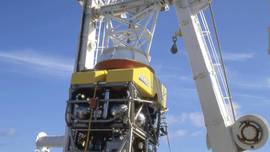 Marine Scientists go to ground in the deep-sea

On the 22nd of May, Polarstern, the research ice-breaker of the Alfred Wegener Institute (AWI), departs Bremerhaven on a twelve week deep-sea expedition in the northern North Atlantic and Arctic. A team of altogether 150 scientists, engineers and technicians will study geological, biological, chemical and oceanographic processes during three separate cruise legs. The research cruise is being organised by the Alfred Wegener Institute and the French Ifremer (Institut Francais de Recherche pour l'Exploitation de la Mer).

Sea ice scientists lead by the Alfred Wegener Institute of Polar and Marine Sciences (AWI) are presently investigating the accuracy of the environmental satellite “Envisat” and the upcoming ice-satellite “CryoSat” for sea ice measurements in the Arctic. For this purpose, the German research icebreaker “Polarstern”, during its ARK XIX cruise, is currently frozen into the pack, 900 km from the North Pole, with air temperatures down to –30°C.

Scientists from the Alfred Wegener Institute (AWI) have managed to explain the origin of unusually warm water masses in the Arctic. Ocean currents simulated by a computer model explain measurements made during the nineties which indicated unexpected warming but also, in some places, unexpectedly low temperatures. As a result, the circulation of water masses through this section of the world ocean is better understood. The model does not only reproduce data from the past two decades, it can also be used to make predictions. The publication of these findings was included in the recent Highlights list of the American Geophysical Union.

Polar aircrafts back from Antarctic 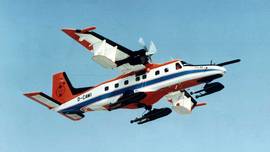 On Friday, 14 March 2003, at nine o'clock in the morning, the two Alfred Wegener Institute (AWI) polar aircrafts will arrive back in Bremerhaven Luneort. Scientists measured the ice thickness in the Antarctic glaciers, to work out whether the ice thickness was increasing or decreasing in these areas. From data obtained in the previous season (2001/2002), AWI researchers calculated that the glacier, Jutulstraumen, approximately 120,000 square kilometers in size, belonging to the east Antarctic, had a constant mass. „This glacier is stable“ said Dr. Uwe Nixdorf, scientific leader of the AWI polar aircraft missions, "we are assuming that it is representative for the whole of the east Antarctic".