Research Without Borders in the Arctic

Svalbard, a Norwegian archipelago to the east of Greenland in the Arctic Ocean, is home to one of the northernmost settlements in the world: Ny-Ålesund. The town itself is essentially the “largest laboratory for modern Arctic research” – consisting of labs and stations operated by eleven countries, it brings together researchers from across the globe, and from different polar research disciplines. Scientists from France and Germany work together at a joint facility in Ny-Ålesund: AWIPEV Base.

AWIPEV Base was founded in 2003, when the Alfred Wegener Institute and the French Polar Institute Paul Emile Victor (IPEV) merged their previously separate stations, Koldewey and Rabot. Today AWIPEV Base offers living quarters and workrooms for many researchers. As the base’s primary focus is on fundamental research in the environmental sciences, its resources include laboratories for physical, biological and chemical experiments; since 2005, the marine laboratory operated by the Norwegian company Kings Bay has also been available for marine biological research.

The centrepiece of the AWI’s research facilities in Ny-Ålesund is the Atmospheric Observatory, which is used to monitor our atmosphere from ground level to the stratosphere. Here, researchers can use a broad range of equipment to identify, measure and record meteorological parameters, radiation data, and the characteristics of aerosols and trace gases in the troposphere and stratosphere, e.g. the ozone concentration. This allows them to keep a close eye on climatic and atmospheric changes in Earth’s polar regions.

On Svalbard, biologists investigate e.g. how higher levels of UV radiation are affecting sea life in the fjords, and how these organisms are responding to increasing ocean acidification, while geoscientists focus more on permafrost soils and changes in glacier systems. Researchers also use AWIPEV as a logistical base for expeditions in the vicinity of Ny-Ålesund and West Svalbard.

Prior to the German-French partnership there was a small German station in the “blue house” in Ny-Ålesund. Founded in 1991, it was named after Carl Christian Koldewey (1837-1908). The house is still in use today as part of AWIPEV Base.

In 1852 Carl Koldewey left school early, beginning his seafaring career the following year. Over the next several years he completed his captain’s training, and in 1866 began his studies in Hannover, working to become a navigation instructor. He would go on to continue his studies of mathematics, physics and astronomy at the University of Göttingen.

In 1868 August Petermann put him in charge of the first North Pole expedition with the ship “Greenland”, a journey quickly followed by the historic second German North Pole expedition with the “Germania”, where Koldewey once more served as captain and expedition head. Though the original plan was to reach the central Arctic and penetrate as far as possible into the Bering Strait, the ship never made it past Greenland.

After several attempts, the impenetrable ice forced Koldewey to turn back at 75.5°. Following these voyages, Koldewey became intensively involved in both academic and prose publications. In 1871 he began working at Neumayer’s German Hydrographic Office in Hamburg, assuming leadership of the Nautical Instruments department in 1875. His later works primarily focused on “compass theory”. On 31 July 1905 Koldewey went into retirement.

AWI scientists carry out regular measurements. These are available online at: 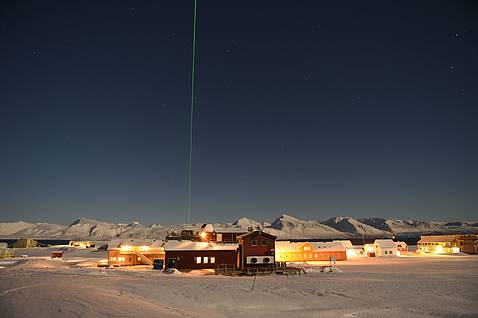