Much of the Alfred Wegener Institute’s research is conducted in the inaccessible, ice-covered regions of the Arctic and Antarctic, making research aircraft indispensable. Currently the AWI relies on the research planes Polar 5 and Polar 6.

The two Basler BT-67 planes have been specially modified for flying under extreme polar conditions. Their landing gear, which combine skis and conventional tyres, allow them to land on and take off from concrete, gravel or snow. Thanks to de-icing systems, heating mats for the batteries and engines, and advanced navigation systems, the craft can even fly “blind” on instruments alone, safely land despite severe weather, and operate at temperatures down to -54 degrees Celsius.

AWI researchers use the aircraft to better understand processes at work in the polar regions, and to monitor and record interactions between the Earth’s crust, ice- and snow-covered areas, oceans and the atmosphere. Several times a year, Polar 5 and Polar 6 fly weeks-long expeditions in the Arctic and Antarctic. They carry on board a diverse range of scientific equipment, much of which was developed at the AWI. Depending on the purpose of the respective flight, equipment is supplemented or supplanted.


The planes are also vital to maintaining logistics between different international research stations in the Antarctic, where the AWI is an active member of the international
DROMLAN Network – as part of this logistical partnership, Polar 5 and Polar 6 transport materials and staff between the various stations and are also on-call to render aid in case of emergencies. 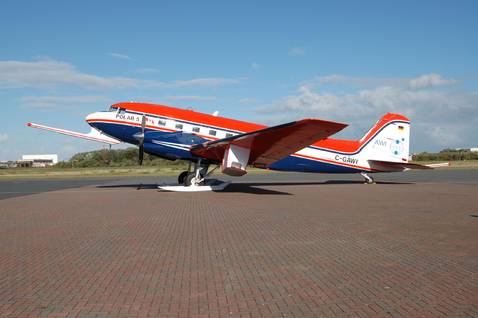 Retrofitting into a high-tech aircraft

Polar 5 and 6 are largely identical; in the following overview, information exclusive to Polar 6 is listed after the notation ||:

(Technical Data/Valid as of 09.09.2014: All flight performance references depend on various parameters including weather conditions, actual weight and type of manoeuvre flown; accordingly, they can vary greatly in individual cases.)