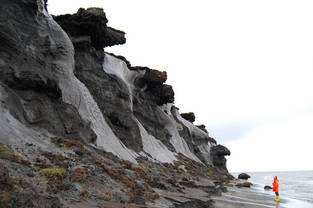 How thick is the old ground ice? 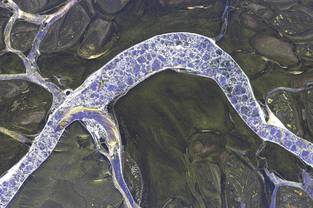 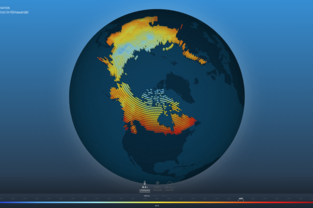 Herschel Island: a remote location covered with the lichens, mosses and grasses of the tundra, bordered by steep and eroding cliffs, and characterised by temperatures that only crawl above freezing between June and September – but for AWI researcher Hugues Lantuit and the team from his Young Investigators Group COPER (which stands for Coastal Permafrost Prosion, Organic Carbon and Nutrient Release in the Arctic Nearshore Zone), it’s the ideal field laboratory. Lantuit and his team want to determine how fast the permafrost is thawing on the island, a process causing entire stretches of coast to crumble and fill the surrounding Beaufort Sea with the carbon and nutrients that had become trapped in the soil over the millennia. Since 2006, Lantuit has travelled summer after summer to the island, which is located at the northernmost tip of Canada’s Yukon Territory, and has been accompanied by his COPER Team since 2012.

How much carbon is stored in the permafrost?

Scientists estimate that the soil in permafrost areas contains somewhere between 1300 and 1600 billion tons of carbon. About 825 billion tons of these are currently frozen. The entire atmosphere, for comparison, currently contains about 870 billion tons of carbon. The permafrost carbon was produced by animal and plant organic matter that has been locked inside the Earth for thousands of years. Though the majority of the carbon can be found in the upper soil layers, there are also unknown quantities of carbon stored in the submarine permafrost - having first formed on land during the last ice age, this permafrost was covered by the rising seas when that age came to an end, and is now under the ocean floor.

To what extent will thawing permafrost intensify climate change?

When permafrost thaws, bacteria and microorganisms will begin breaking down the plant and animal organic matter it contains. As a result, carbon dioxide or methane will be released, depending on how dry or wet the soil remains. Though methane only makes up two per cent of the greenhouse gases released, it's a highly potent gas; its global warming potential over a 100-year time frame is nearly 25 times higher than that of carbon dioxide.

It was previously assumed that permafrost regions are carbon sinks. But there currently are only a few long-term measurement series that examine the carbon balance in permafrost regions year-round. One is from the AWI's Bayelva Permafrost Station near Ny-Ålesund (Svalbard); another is from Alaska. The readings in Alaska confirm that the area surveyed is a carbon sink. However, those from the Svalbard site show an annual carbon balance of about zero. In other words, here we see an equilibrium between the absorption of carbon by vegetation during the summer and the long "winter outgassing", during which microorganisms break down the carbon beneath the snows.

With the help of models, researchers now estimate that if global warming continues unabated, the greenhouse gas emissions from permafrost, disregarding all other sources, could produce an additional temperature increase of up to 0.29 degrees Celsius by the end of the century, and of up to 0.40 degrees by 2300.

Will the tundra become greener if temperatures continue to rise?

If temperatures rise in the Arctic, it will stimulate plant growth and fixation of carbon in organic matter, initially counteracting the greenhouse gas emissions from the permafrost soils. However, in the long term and in the face of continually rising temperatures, the emissions produced by microbial decomposition will surpass the plant’s ability to absorb carbon dioxide.

Explore more: A symbolic tree in the Russian Arctic

How does permafrost thaw?

The thawing processes aren’t linear. For example in Ny-Ålesund, where measurements of permafrost temperatures have been taken since 1998, AWI researchers have observed an intensive thawing process that has increased the active thaw layer by 50 centimetres. Farther down, however, the permafrost temperatures remain largely unchanged. In contrast, in the Lena Delta not only has the thaw layer moved deeper, the underlying permafrost is also rapidly warming – by more than 1.5 degrees Celsius since 2006 (recorded at a depth of ten metres).

Why are permafrost coasts increasingly crumbling?

Coastal erosion in the Arctic has intensified over the past several decades as a result of dwindling sea-ice cover on the Arctic Ocean during the summer, higher water temperatures and rising sea levels. When there is less sea ice, storms can produce larger waves that gnaw away rapidly at the permafrost shores along the Arctic Ocean from June to October. On average the Arctic coastline recedes by circa half a metre per year, however, individual coasts that consist of ice-cemented permafrost sediments retreat with up to 25 metres per year. These rapid changes have major effects on ecosystems on or near the coast and their populaces, primarily through loss of land and the influx of sediment and nutrients in the water.

Explore more: The Atlantis of the Arctic

Two time lapse movies from geoscientist Dr Julia Boike. The first one impressively shows how permafrost in the Arctic thaws. In the summer of 2012 scientists from the Alfred Wegener Institute had placed an automatic camera on the Eastern shore of the river Lena on the Samoylov island. Every four hours the camera took a picture over the course of 10 days and captured how the frozen ground retreats. The second movie shows how scientists build a soil station in the Arctic permafrost. For this they installed sensors, which will tell them what happens underneath the surface. 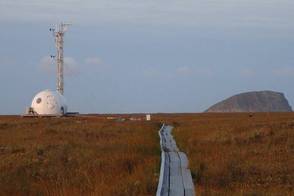 More methane from Siberia in summer

What happens in the vast permafrost regions of the Arctic when the atmosphere heats up? The question still drives climate researchers because the frozen ground contains large amounts of carbon, which can be converted by microbes into the greenhouse gases methane and CO2. If the gases are released, this could accelerate global warming even more. Now, AWI researcher Julia Boike, together with colleagues from the GFZ and University of Hamburg, has published results from an almost twenty-year series of observations in Siberia. To the original press release. 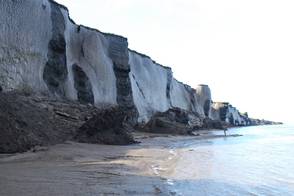 As a result of global warming, permafrost regions around the world are thawing now. As they do, climate-relevant greenhouse gases containing carbon (carbon dioxide, methane) and nitrogen (nitrous oxide) can be released from the soil and into the atmosphere. A team of experts led by the Alfred Wegener Institute has now determined the size of the nitrogen reservoir and calculated how much of it could be released as climate change progresses. The team’s findings have just been released in the journal Nature Communications. 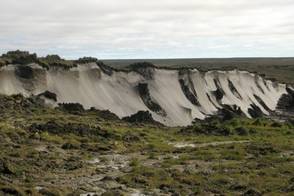 How is climate change affecting the permanently frozen soils of the Arctic? What will the consequences be for the global climate, human beings, and ecosystems? And what can be done to stop it? In the journal Frontiers in Environmental Science, a team of experts led by Benjamin Abbott from Brigham Young University, USA and Jens Strauss from the Alfred Wegener Institute in Potsdam summarise the current state of knowledge on these questions. In addition, an AWI group led by Moritz Langer has now created an interactive map of the past and future of permafrost.