Thanks to cutting-edge techniques, today AWI researchers can more accurately gauge the thickness of sea ice in the polar regions than ever before. To do so, they compile and assess satellite data, take samples from ice floes and tow measuring equipment behind planes and helicopters. This combination of various methods not only yields more precise results; it also allows researchers to better grasp climate change.

A rhythmic beating sound fills the blue sky. The helicopter slowly rises from the helideck of the Research Vessel Polarstern. As it does, the steel cable under its belly slowly grows tighter. The helicopter continues to climb, rising over Polarstern’s smokestack. Then the cable goes taut, lifting what looks like a torpedo from the ship’s deck. Two men are holding onto the device to keep it from swinging back and forth. Once the “torpedo” is hanging freely above the helideck, the pilot opens up the throttle. With a loud roar the helicopter speeds away – over an expanse of sea ice that stretches to the horizon.

On board the helicopter, AWI sea-ice physicist Stefan Hendricks is sitting behind the pilot, typing on a laptop. He’s checking the altitude readings and other measurements being transmitted by the torpedo below. Hendricks is wearing a headset, the only way he can communicate with the pilot over the noise of the rotor: “We need to go a bit lower.” The pilot complies, making a low sweep over the ice. He concentrates on keeping the helicopter steady: since the torpedo is only 15 metres from the ground, all it would take is a moment’s distraction and it would skip off the ice, destroying the measuring equipment within it.

The torpedo, affectionately referred to as the “EM-Bird,” is one of the most valuable tools available to Stefan Hendricks and his colleague Thomas Krumpen from the AWI’s sea-ice group in their work in the Arctic and Antarctic. The device is used to measure the sea-ice thickness in the polar regions, especially the Arctic.

Today, sea ice offers one of the most important ways for measuring climate change, as the fate of the ice is directly dependent on global warming. By combining satellite data on the expanse of polar ice with information on the ice’s thickness, it is possible to roughly estimate the total amount of ice – and gain valuable insights on the status quo and development of the global climate. The EM-Bird helps researchers do so.

As the EM-Bird glides over the ice, it measures how high it is above the ice-water boundary – i.e., how high it is over the ice underside. At the same time an integrated laser measures how high the torpedo is over the surface of the ice – the distance to the ground. By comparing the two measurements, the EM-Bird’s onboard computer can then calculate the thickness of the ice. Since the helicopter’s metal hull would throw off the readings, the device has to be suspended from a cable.

The AWI’s sea-ice physicists have been using the EM-Bird since 2001. In a typical Polarstern expedition, one of the onboard helicopters flies up to 40 nautical miles away from the mother vessel before deploying the device over the ice. Since the EM-Bird makes ten measurements per second, each flight yields a wealth of data. For the past several years, the AWI’s two polar research planes have also carried out land-based measuring flights – taking off from Svalbard or the coast of Canada, for example. Their EM-Bird flights can range up to 350 nautical miles. During take-offs and landings, the EM-Bird is safely stowed in a brace mounted on the hull; it is only lowered with a winch once the plane is airborne.

One limitation of the electromagnetic induction system used by the EM-Bird is that it can’t differentiate between snow and ice, since both layers are largely electrically nonconductive. But more can be learned by additionally consulting the information provided by the laser. The laser measures both the height of the snow and that of the ice above the water’s surface, referred to as the freeboard. That being said, the laser can’t penetrate the water below. “The EM-Bird can tell us the total thickness of snow and ice, while the laser gives us the freeboard. By combining the two, we can arrive at much better estimates of the actual thickness,” says Stefan Hendricks with a certain degree of pride. “We’re currently one of only very few research groups in the world to use both techniques in the same aircraft.” Accordingly, the researchers are happy to share their data on international sea-ice portals. “Above all, we also conduct basic research intended to help better understand sea-ice formation, and especially the effects of climate change, in the future,” says Stefan Hendricks.

The EM-Bird is a small and lightweight, digital frequency-domain electromagnetic-induction (EM) system, dedicated for measurements of sea ice thickness. It looks a bit like a torpedo, but is instead filled with various sensors measuring the thickness and roughness of the sea ice along extended transects. Broad mapping of ice floes can be accomplished using the EM-Bird.

The dynamic of sea ice

Thinner and less compact sea ice is subject to higher dynamics. For instance, it is carried away faster and more easily by wind and ocean currents. As a result, transport processes accelerate in most regions of the Arctic.

Sea ice and snow on sea ice usually warm and melt faster on cloudy days than on days with clear sky.

The thickest sea ice still can be found at the coast of Greenland and Ellesmere Island, where it has formed a belt of old ice, that is up to five metres thick. Some of its press ice ridges extend up to a height of 30 metres. Theses ridges form, when the wind is blowing and piling up an enourmous amount of ice floes.

Where have we been?

AWI sea-ice physicists have been collecting Arctic sea-ice data since the year 1991. However, due to the vast area it is difficult to get data from all parts of the Arctic. The following graph shows the tracks of all helicopter and aircraft-based EM-Bird flights in the period from 2001 to 2012.

The challenge for Stefan Hendricks, Thomas Krumpen and their colleagues is that, though they would like to survey the largest possible area of sea ice, ideally the entire Arctic, at the same time their measurements have to be as precise as possible – otherwise they can’t provide realistic estimates of the total ice quantity in the Arctic. The most precise method would be to use thickness measurements made directly on the ice, for example by taking ice cores from the surface ice with an auger. But the Arctic is vast, and the AWI sea-ice researchers can’t cover it all. Instead, they combine various methods to arrive at the best possible estimates. “We use the entire range of methods,” explains Thomas Krumpen. “First, onsite measurements; second, flights with the EM-Bird; and third, satellite data.” Each method has its own strengths and weaknesses.

The combination effectively compensates for those weaknesses. When Stefan Hendricks and Thomas Krumpen are on board the research icebreaker Polarstern, the vessel makes regular stops – an average of ten per expedition – so that the researchers can leave the ship and make direct measurements. The researchers not only collect ice cores but also employ automatic measuring devices, including a temperature chain with thermal sensors, which is used to measure how the ice gradually grows. The researchers drill a hole in the ice and insert the temperature chain, which extends several metres below the surface. As the ice gradually grows thicker, the temperature chain freezes centimetre by centimetre. Since ice maintains a constant temperature, the sensors can detect the progress of the freezing; the latest readings are then transmitted to Bremerhaven via a satellite uplink. Though these measurements are extremely precise, they are only recorded at a handful of select locations.

Yet even with the help of measuring flights, the researchers can only see a small percentage of the polar ice masses, which is why they also incorporate ice maps from the radar satellite Cryosat-2, provided by the European Space Agency (ESA). The satellite’s radar can sweep a 1,600-metre-wide section of the Earth’s ice masses at once. Though it can’t hope to match the precision of surface measurements or the EM-Bird flights, the Cryosat can cover the entire Arctic in just one month’s time. Further, its radar can easily cut through cloud cover. The only problem: the radar can only partially penetrate snow cover. The AWI researchers have to take this effect into account to avoid miscalculating the ice thickness.

In order to determine how reliable the Cryosat-2’s ice-thickness data actually is, two years ago Stefan Hendricks and his team launched an unconventional measuring campaign: they made measuring flights with one of the AWI’s planes, simultaneously sweeping the same sections as the Cryosat-2. As Hendricks recalls, “That was no mean feat, because we had to first use the satellite’s flight data to calculate when it would be close by. But it worked; we made our flight at precisely the right time.”

By comparing the satellite data with the data from their flights, the sea-ice researchers can now better gauge the accuracy of the information supplied by the Cryosat-2 – and more closely estimate the ice thickness for the Arctic as a whole. “Nevertheless, every method still has a degree of uncertainty,” says Hendricks. “For instance, we still have to use theoretical principles to estimate the snow thickness, since satellites still can’t measure it. So it’s still difficult to produce exact calculations.” But the sea-ice researchers are constantly working to optimise their measuring and data-assessment methods; they’re currently collaborating with their peers at Hamburg University of Technology (TUHH) to develop a snow radar system that can more accurately measure from the air than ever before. So Stefan Hendricks and his colleagues likely have plenty more helicopter flights over the ice to look forward to!

Marine biology: What goes on beneath the floes 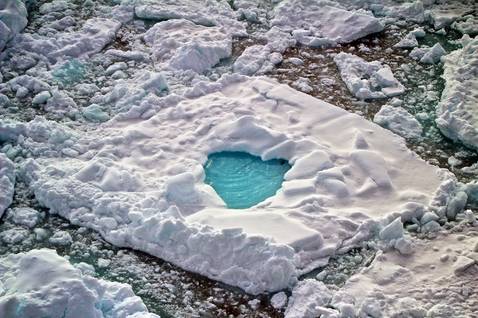 Knowledge at a glance