Dr Felix Mark from the Alfred Wegener Institute, Helmholtz Centre for Polar and Marine Research has been studying how ocean acidification impacts fish and other ocean dwellers for five years. For the second ocean acidification report of the Convention on Biological Diversity (CBD) he compiled present-day knowledge together with colleagues from all over the world. In the interview the eco-physiologist talks about what science has accomplished in the past years and what kind of research is still necessary in the coming years.

Dr Mark, when the first CBD report on ocean acidification was published, research was still in its infancy – what progress has it made since then?

The past five years were certainly decisive for ocean acidification research. Prior to that some researchers had investigated rather broad aspects like calcification and growth using very high carbon dioxide concentrations of 3,000 ppm and more, i.e. nearly ten times today’s concentration. Only in recent years we have started to work with relevant carbon dioxide concentrations that we expect up to the years 2100 and 2200. We have looked at various life stages of animals such as fish and crustaceans and studied the interrelationships between the individual species so we are beginning to understand how individual species interact under the influence of ocean acidification and what the consequences are when a species disappears from the food web and whether animals can adapt over several generations.


Ocean acidification is only one factor that alters the ocean as a habitat. How can scientists differentiate its influence from other factors, such as temperature rise and oxygen depletion?

Ocean acidification, temperature rise, oxygen depletion and pollution of the seas – these are, of course, all factors that reinforce or weaken one another and jointly have an impact on an ecosystem.

High temperatures, for instance, cause the oxygen concentration of the water to drop. Furthermore, cold-blooded organisms have higher metabolism rates in warm water, as a result of which the oxygen concentration declines further and the carbon dioxide concentration increases. In this case, therefore, there is a combination of three factors that we cannot really look at individually and which together clearly create a different picture than when examined individually.

As scientists, however, we are interested in being able to say what factor has which impact. For this reason the first approach is initially to observe them individually. We have done that in the past years. In the next step we will attempt to combine the various factors in order to observe what synergies exist between them. Does everything always lead to a worsening or do certain factors balance out in the end?


In the laboratory it is only possible to examine individual species. How can scientists put together an overall picture from that and in this way assess how the ocean as a whole will react to ocean acidification?

That’s one of the big questions: how can I make conclusions about a community from a single species? Or to put it another way: how many individual species of an ecosystem do I have to examine to be able to say something about the entire system? We are definitely not able to observe 50 percent or even only 30 percent of the species of an ecosystem in experiments. In the next few years, therefore, we will have to work a lot with models that build on experience and the results we have now. In this way we can try to generate an overall picture.

Eco-physiologist <link ueber-uns organisation mitarbeiter felix-christopher-mark.html _self personal-page-link>Dr. Felix Mark was co-author of the second ocean acidification report of the Convention on Biological Diversity (CBD), which was released in October 2014. He is also lead of the consortium "Effects of ocean acidification in a warming climate on species interactions at distribution boundaries: Mechanisms and consequences at ecosystem level" of the national research programme
BIOACID II. 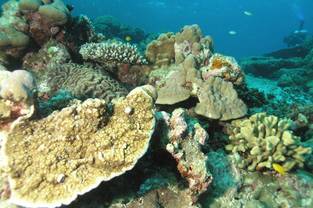 Summary of the current knowledge on ocean acidification

Changes of the sea water chemistry

This dataset has both historic and forecasted model-based changes in the ocean's carbonate chemistry due to increasing CO2 levels, as well as the presence of coral reefs depicted. As atmospheric levels of CO2 increase, the amount of CO2 that is absorbed by the ocean increases as well. This increase of CO2 in the ocean upsets the carbonate chemistry of the ocean and causes the waters to become more corrosive. The images indicate that all of the Southern Ocean surface waters south of 60°S and portions of the North Pacific become undersaturated (corrosive) with respect to aragonite, a form of calcium carbonate.

Observations show that current ocean acidification and warming are taking place at a much faster pace that was previously the case in the history of the Earth. The question is therefore whether the animals can hold their own at this speed and adapt fast enough. Thus far we have studied the short-term adaptability of marine organisms. What is crucial now is long-term adaptation.

We want to understand how and whether marine animals are able to adapt via evolutionary processes – and that will be really difficult. We cannot simply observe ten generations of a certain species under laboratory conditions in order to see what changes from generation to generation. The Atlantic cod, for example, reproduces too slowly to be able to do this. That means we have to select a handful of creatures that reproduce rapidly and treat them as model organisms.

However, we can also look at different populations. For instance, we compare a cod population from the southern North Sea, i.e. from the warmest range of the species, to a population from the northern Atlantic, from the fjords of Spitsbergen and the Barents Sea. They are two extreme populations that have adapted to the respective living conditions over evolutionary time scales. If we examine the differences in their physiology, such as their metabolic rates and various fitness factors like their swimming capabilities, we can basically attempt to draw conclusions on how the populations have further developed.


What next steps in ocean acidification research does that mean for the scientists at the Alfred Wegener Institute?

At the moment we are in the process of preparing the individual available results in such a way that they can be used in ecosystem models. A question that arises for us in this connection is which is the best model. On the one hand, models have to be as simple as possible so they function well. After all, the more influencing factors they have, the more complex they get and naturally the greater is the deviation of a result if one has incorrectly set an influencing factor somewhere. On the other hand, a model also has to be complex enough to be able to draw reliable conclusions for the future. It thus comes down to identifying the few important influencing factors that a model absolutely must include.

What progress do you expect in ocean acidification research in the next five years?

In the next five years we will certainly not make the same leap in knowledge that we achieved over the past five years. I hope we will be able to say more about how ecosystems will react to declining pH values. For this purpose we will compile the results we have for individual species so as to obtain a more complete picture.

We will also have a more realistic view of the situation since we no longer focus only on certain especially sensitive species. In the past this often led to the impression that ocean acidification will have dramatic impacts. However, that is definitely not the case for all species.

Ocean acidification was frequently called the evil twin of climate warming. Have the current findings made it less frightening?

Ocean acidification is more the evil little brother of climate warming. This is based on our investigations, which indicate that the rising temperature has severe consequences. Ocean acidification is thus an additional effect. It aggravates the impacts of warming in most cases, but not always.

However, acidic water may impact animals in a completely different way from warmer water. It may, for instance, alter the behaviour of an organism.


An important question at the end of the previous CBD report on ocean acidification was the determination of so-called tipping points – has research been able to define these up to now?

Tipping points, or sensitivity levels, as we also call them, are incredibly difficult to formulate because they are extremely species-dependent and diverge between the individual life stages. There is a certain limit, for example around 1,500 ppm, where a reversal of certain effects takes place. There is a phenomenon in this connection known from fish farming: when the pH value drops a little, fish grow significantly better.

We have also ascertained this in laboratory experiments with the Atlantic cod. In fish that we have kept at a carbon dioxide concentration of around 1,000 ppm, i.e. at double to triple the figure compared to today, the declining pH value has a stimulating effect on their growth. This effect reverses if we work with concentrations around 2,000 ppm. The animals then suddenly stop growing. That means the threshold is somewhere between these concentrations. A limit is reached here, as of which the organism can no longer adapt, and it is presumably somewhere between a pH value of 7.8 and 7.6. For egg and larval stages of the same species, however, these limits may be reached much earlier. And there are plenty of other exceptions. Some sea urchins, for example, are unbelievably sensitive and their tipping point is much lower.

And finally there is the question of where the tipping point of an ecosystem is? Up to what point can an ecosystem adapt to a situation where some species disappear and others spread? And as of what point is there a long-term detrimental effect on an ecosystem?


Without being able to indicate a certain figure – do you think the ocean will get to a point where its ecosystem is fundamentally altered?

According to what we are observing at the moment, it looks like we are heading for far-reaching changes. The question is actually, therefore, no longer whether, but when we will reach this threshold. The time factor is incredibly important here since the more time organisms have to adapt, the less will presumably happen in the end. Gradual shifts in the ecosystem are easier to cope with than abrupt changes.

However, we are also aware that some marine regions will change to a greater extent than others. In ecosystems in which key species react sensitively, the consequences will naturally be dramatic. The polar cod, for instance, is a key species for the Arctic ecosystem and our results indicate that it reacts relatively sensitively to the new living conditions. Thus, the structure of the ecosystem in the Arctic may shift substantially. 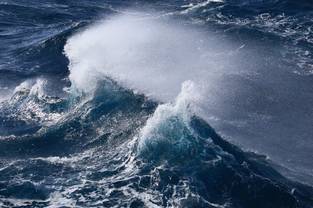 Ocean acidification at a glance

"We are talking about a
deadly trio"

Success story of a resistance
fighter