In response to the Russian war of aggression against Ukraine, the Federal Ministry of Education and Research (BMBF), in coordination with the Foreign Office and the Federal Chancellery, announced a fundamental change in its cooperation policy with Russia and Belarus on February 25,22. Nationally and internationally, this pursues the goal of isolating the Russian government as far as possible. For this reason, all current and planned projects of the Alfred Wegener Institute with government agencies in Russia will be frozen and/or critically reviewed. For further inquiries, please contact taskforce.ukraine@awi.de.

The research station island Samoylov offers Russian and German researchers the possibility to examine the permafrost in the Lena Delta and to draw conclusions in regard to past and current climate events.

Since 1998, a partnership with Russian scientific institutes has opened the door to fieldwork in the Siberian tundra. Up until mid 2013, AWI researchers and their Russian colleagues still did so at an old research base on Samoylov Island with the rustic charm of a remote summer camp.

Since 2013, the island has been home to a modern research base operated by the Trofimuk Institute for Petroleum Geology and Geophysics, Siberian Branch, Russian Academy of Sciences. Whereas before, the researchers could only work in Siberia in the summer, the cutting-edge station now allows them to pursue their research year-round.

The new station is chiefly used by the Russian-German LENA research expeditions, which continue from spring to autumn every year. These trips are primarily organised by three institutes: the Alfred Wegener Institute, the Arctic and Antarctic Research Institute (St. Petersburg) and the Melnikov Permafrost Institute (Yakutsk).

The base Samoylov Island is situated on the eponymous island in the Lena Delta. Located in the northeast of Siberia, the delta extends over 150 kilometres into the Laptev Sea and represents one of Russia’s largest conservation areas. The region is crucial to understanding the processes at work in the permafrost of the Siberian Arctic, making it a natural magnet for the AWI’s researchers.

The station can host up to 20 scientists. They conduct long-term landscape experiments and data collection at the station. To aid them in their work, they can draw on extensive datasets produced by automated measuring stations since 1998. In addition to processes affecting the permafrost, the conversion and emission of greenhouse gases are key research areas. Further, the researchers are investigating e.g. the effects of altered thawing processes on the landscapes of the Lena Delta. The researchers’ endeavours at Research Station Samoylov Island will help to estimate the effects of future climate changes on the Arctic ecosystem.

Researchers from the Alfred Wegener Institute not only enjoy access to a large, state-of-the-art laboratory with high-performance, high-precision equipment; the station’s fleet of vehicles includes quads and snowmobiles, a halftrack and several boats, allowing them to also conduct research beyond the limits of the island. A high-power Internet connection helps them keep in touch with their fellow researchers.

The station is located on the southern coast of Samoylov Island (N 72°22’, E 126°29’) in the central Lena Delta, and from Tiksi it can be reached by helicopter (45 minutes), by motorboat (4 hours) or, when the waters freeze over, by the AWI’s all-terrain truck (8 hours). From Tiksi, researchers can then reach Moscow or Yakutsk by plane.

The shape of the Samoylov Island is constantly changing. On the one hand there are seasonal changes by spring floods caused by snowmelt and deep water levels in the fall. On the other hand coastal erosion leads to permanent changes on the southern coast of the island. The construction of a new station on Samoylov served not only the convenience of the scientists: As documented in picture soil erosion brought the river water closer and scloser to the old station and in 2008 the distance between river and old station was only 10 meters. With the halp of aerial photographs, these changes are very well observed. The red line in the picture shows the coastline of 2003, green is for 2007 and the photo itself with the orange line shows the coast of 2008.

Research at the furthest reaches of…

In the Siberian tundra scientists investigate the permafrost of the Lena Delta. 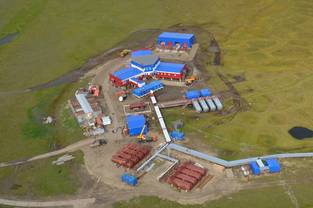