Despite its frigid solitude, at several sites in the Antarctic nations from around the world have joined forces in the name of research: the Argentinian Carlini Station on King George Island, one of the South Shetland Islands, is a prime example.

In 1994 the Alfred Wegener Institute and Instituto Antárctico Argentino founded the first research institute operated by more than one nation – the Dallmann Laboratory, where researchers from Argentina, the Netherlands and Germany work together under the same roof from October to April (the Antarctic summer). Here, up to 14 researchers at a time pursue biological and geo-scientific field research in the ice-free regions and the shallow waters near the coast – which is only possible in a handful of locations in the Antarctic.

In open water and by analysing sediment, research divers investigate algae and animal communities. To help them do so, Dallmann Laboratory offers four labs, a workshop and a storehouse. Research divers from the Center for Scientific Diving can also take advantage of its diving facilities.

An aquarium container allows researchers to examine the live specimens they’ve collected, and to conduct experiments on site. The insights they gain on the ecology and physiology of individual species help the researchers assess how polar symbiotic communities are developing in response to global climatic changes.

The Laboratory was named in honour of the polar explorer and Bremen native Eduard Dallmann, who headed the first German exploration of the Antarctic, or more precisely, of the Antarctic Peninsula, in 1873. The South Shetland Islands lie off the coast of the Peninsula.

The following video (without sound) shows the work of scientists at the station: 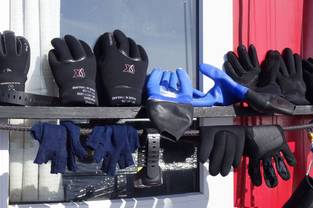 From Whaler to Pole Explorer

Eduard Dallmann was a mere 15 years old when he first went to sea. He soon gathered experience on whaling ships and freighters. In 1859, now a captain, he started out on his first voyage to the Pacific to catch whales. Many more whaling expeditions were to follow. In 1873, he took command of the steamer "Grönland", setting out for the Antarctic Peninsula on another whaling expedition. In doing so, Dallmann was leading the first German voyage to the Antarctic, in the course of which a wealth of geographic discoveries were made.

Soon afterwards, Dallmann was back in the northern hemisphere, where he played a key role in improving access to Siberia in the period between 1877 and 1884. Among other activities in this context, he attempted to establish a sea route to the estuaries of the Rivers Ob and Yenisey in Siberia.

In 1884, he entered the service of the "New Guinea Company" and explored the coastlines of New Guinea. Health problems, as well as bitterness over the despotism and injustice of Germany's colonial activities induced Dallmann to end his professional career in 1894.