An Icon of German Polar Research

The Research Vessel Polarstern is the most important resource for German polar research and the flagship of the Alfred Wegener Institute. Commissioned on 9 December 1982, the Polarstern has since logged more than 1.5 million nautical miles, or roughly 2.7 million kilometres (as of 2014). Today she’s one of the world’s most advanced and versatile polar research ships in the world.

The Polarstern operates an average of 310 days a year, typically cruising in the Antarctic from November to March and pursuing research in the Arctic during the summer months. In the process, she covers ca. 50,000 nautical miles every year – the equivalent of two trips around the Equator. A veritable powerhouse, the research icebreaker can even operate in the pack ice zone: a double-walled steel hull and 20,000 horsepower allow her to easily break through 1.5-metre-thick ice; thicker ice can be overcome by ramming. Further, the Polarstern is equipped for sustained operations at temperatures down to -50 degrees Celsius, and can even overwinter in the ice of the polar seas.

Thankfully, it’s not nearly so frosty in the ship’s hold, where a crew of up to 44, plus up to 55 researchers and technicians, work and live. In nine scientific labs, international experts conduct biological, geological and geophysical, but also glaciological, chemical, oceanographic and meteorological research. Though Polarstern has a basic complement of scientific equipment on board, between expeditions she is largely “stripped”: which specific types of lab equipment and which scientific instruments will be required, and whether there is a need for additional lab containers, all depend on the research questions and objectives of the researchers involved in a given expedition.

In addition, the Polarstern normally has two helicopters and inflatable boats on board – which are essential, as they allow the researchers to take measurements and gather data outside of the area influenced by the ship. For example, the helicopters are used for observing whales and deploying equipment like the EM-Bird, a device that can measure ice thickness from the air. An onboard computer system ensures that the countless pieces of scientific data from various projects are regularly recorded, saved and, if need be, forwarded.

The Alfred Wegener Institute’s research stations wouldn’t be able to operate without the Polarstern; for example, the ship is instrumental in resupplying the Neumayer Station III, an Antarctic base manned year-round. The supplies vary from fresh vegetables for the station team, to cutting-edge IT equipment, to the nuts and bolts needed for routine maintenance.

The fact that the Polarstern, originally commissioned in 1982, still counts among the most advanced research ships in the world is also thanks to a complete overhaul: from 1999 to 2001, the ship was refitted to implement the latest technologies available. A successor to the Polarstern is also planned.

What’s on the odometer?

By 2012, the research icebreaker Polarstern had logged 1,462,338 nautical miles. That number can be broken down into 351,072 nautical miles in the Arctic and 681,547 in the Antarctic; the remaining 429,719 nautical miles were on transit routes. One nautical mile is equivalent to 1.852 kilometres.

Metre upon metre of cable

Whether for trawling, deep-sea work or collecting sediment cores: to ensure their work goes smoothly, researchers have 52,620 metres of steel cable at their disposal, stored on a total of 9 winches.

In a month of operations, the Polarstern’s engines and boiler burn ca. 900 tonnes of diesel fuel. In the same amount of time, the ship’s galley bakes 3,150 rolls, and ca. 3,200 eggs, 360 litres of milk and 180 litres of various fruit juices are consumed in the mess hall. And to help make sure all that food and drink is cleanly disposed of, every month the stewardesses distribute 680 rolls of toilet paper to the ship’s cabins.

Prior to leaving port for an expedition, the ship’s sickbay is stocked with 1,000 tablets, 200 bandages, 45 ampules and 200 suppositories to help with seasickness. 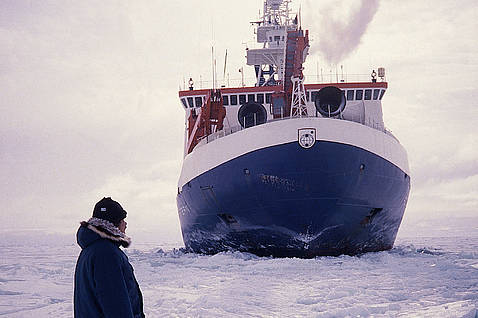 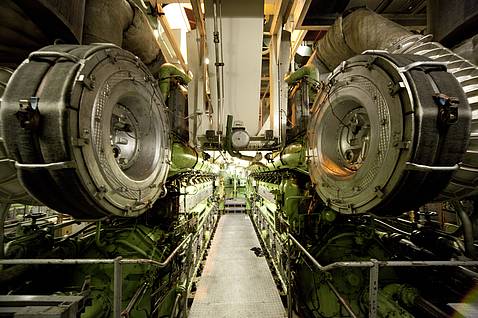 A ship unlike any other