Meeting of the ‘Scientific Committee on Antarctic Research’ (SCAR) from October 3rd to 8th, 2004

Between October 3rd and 8th, delegates of the international ‘Scientific Committee on Antarctic Research’ (SCAR) will be gathering in Bremerhaven. The results and proposals for new research ventures and international cooperation in the Antarctic, developed during the 28th scientific conference of the committee in July, will now be discussed and finalised. Roughly 100 delegates from 31 countries are expected at the Alfred Wegener Institute for Polar and Marine Research and at the Historical Museum in Bremerhaven.

How often do we look at the sky each day? Again and again, our gaze moves up to watch the display of passing clouds. Up to now, clouds have been also an unknown component in the calculations of arctic scientists trying to explain the phenomenon of arctic haze. However, scientists of the Alfred Wegener Institute for Polar and Marine Research (AWI) at the Potsdam Research Unit were able to use new data to somewhat 'lift the hazy veil'. The results have now been published in 'Geophysical Research Letters'. 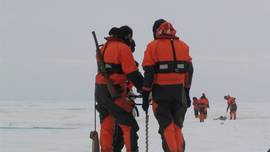 Over the past six weeks, scientists aboard the research vessel "Polarstern" of the Alfred Wegener Institute for Polar and Marine Research have been investigating changes in ocean temperature and sea ice cover in the area of Fram Strait between Spitsbergen and Greenland.

In this area significant exchange of water masses between the Arctic Ocean and the Atlantic Ocean takes place. The ongoing process of global warming throughout the past years has also altered conditions in Fram Strait and the North Polar Sea. 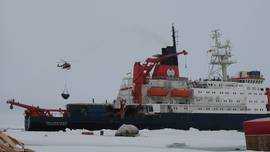 On August 16, 2004 early in the morning the German research vessel RV Polarstern discovered the remains of the abandoned Russian drifting ice camp North Pole-32 on an ice floe. The position of the floe was 82°16`N – 004°21`W. Three more or less intact barracks (one with antenna), one tent, two damaged barracks, two tractors, three larger fuel depots with about 300 drums, sleeping bags, nets and other material were found. In one of the barracks a calendar was found with the last entry date March 6, 2004. Two thirds of the drums were empty. Ninety percent of the full drums contained diesel, the rest contained remains of petrol, oil and kerosene.

The 28th International Antarctic conference of the Scientific Committee on Antarctic Research (SCAR) will take place in the Congress Centre in Bremen July 25 through July 31 2004. About 850 scientists from 39 countries are expected to attend this most important Antarctic research meeting. All disciplines of Antarctic research will be represented. Hence, the SCAR conference will provide a good opportunity to find out about the current status of and perspectives for Antarctic science.