40 years of the Alfred Wegener Institute: That also means 40 years of research in the Arctic, Antarctic and in coastal regions: on 15 July, the AWI, celebrates its 40th anniversary. With its innovative science and excellent research infrastructure, the AWI has become a global leader and internationally recognised centre for climate research in the two polar regions and the world’s oceans.

In order to celebrate the anniversary properly, there are various offers on this page to review 40 years of the institute's history. 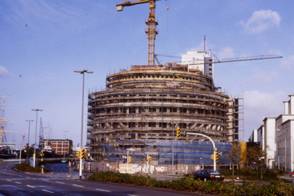 40 years of research in the Arctic, Antarctic and in coastal regions: on 15 July, the Alfred Wegener Institute, Helmholtz Centre for Polar and Marine Research (AWI) celebrates its 40th anniversary. With its innovative science and excellent research infrastructure, the AWI has become a global leader and internationally recognised centre for climate research in the two polar regions and the world’s oceans.


It was a venture into uncharted territory: on 15 July 1980, German polar research received the first institute of its own. What set the ball rolling back then? What has happened since? And where does the AWI stand today? In the following interview, we take a look back on the institute’s first 40 years with Dr Christian Salewski, historian and head of the Archive for German Polar Research.

How did the idea of founding the AWI come about 40 years ago?

It went hand in hand with the Antarctic Treaty, which the Federal Republic of Germany became a party to in 1979. Another consideration was ensuring access to the white continent’s living and mineral resources: fish, as well as oil, gas, coal and rare metals. So the administration under Helmut Schmidt did its best to get a foot in the door.

And doing so required a research institute?

Yes. Because when it comes to influencing the peaceful political development and economic use of the Antarctic, only the so-called consultative parties have voting rights. But countries are only accepted into this group if they can prove that they regularly pursue scientific activities in the Antarctic. And supporting those activities requires a research station on site and an icebreaker. The AWI was to operate both of these key resources, and also to coordinate the work of the universities and institutions of higher learning that would continue their research in the polar regions.

From a historical standpoint, what made the new institute special?

Up until then, it had been individual scientists at a variety of universities and institutions who had worked in and undertaken expeditions to the polar regions. Now however, for the first time, polar research had a home institute. Further, this step hadn’t been decreed from above, as had been common practice in Imperial Germany, Nazi Germany, or the GDR. Founding the AWI was a democratic process. It was based on the German federal parliament’s decision to become a party to the Antarctic Treaty, and on a law passed by the state parliament of Bremen that decreed that the AWI should be created as a foundation. The reason for making the AWI a foundation was that, according to international law, the Federal Republic could only uphold its responsibility to protect the station and ship, and effectively attend to sovereignty-related aspects, if the AWI were a specific type of legal entity.

What consequences did the creation of the AWI have on the city of Bremerhaven?

In the 1970s, Bremerhaven was still highly dependent on shipbuilding and fisheries – two industries that had experienced severe crises. On top of that came the withdrawal of US troops in 1994. The AWI helped the city overcome this structural change. New buildings were erected, there were new services needed, and new employees flocked to the city. Today Bremerhaven is a well-known research location, and is home to one Fraunhofer institute and two Thünen institutes.

In addition to Bremerhaven, the AWI now has facilities in the most remote regions of our planet. How did this come about?

In the first ten years, developing the infrastructure was the main focus. In 1981, the Georg von Neumayer Station was opened in the Antarctic. A year later, the research icebreaker Polarstern went into service, and shortly afterwards the first polar aeroplanes were acquired. Since then, the infrastructure has been continually expanded. The original station in the Antarctic has already been replaced by more modern versions, and the Neumayer III Station has been in operation since 2009. Furthermore, over the years several smaller stations have been added – like Kohnen Station, which was installed on the Antarctic’s inland ice plateau in 2001, or Koldewey Station on Spitsbergen, which was erected in 1991 and subsequently merged with a French station to form a joint research base known as AWIPEV.

How has the scientific work developed alongside these advances?

After being launched in 1980, the AWI participated in an on-going, major international project – BIOMASS –, which had begun in 1978 and focused on gaining a better overall understanding of the Southern Ocean’s ecosystem. At the same time, the institute pursued research in the fields of oceanography, geology and meteorology. And ever since, in 1986, the Institute for Marine Research in Bremerhaven became part of the AWI, there has been an increased focus on ocean life in all its facets, from plankton to seals.

What other major research topics have since been added?

In the context of projects like EPICA, for example, researchers delved deep into the Antarctic ice sheet in order to reconstruct the climate of the distant past. In addition, the focus expanded to other ecosystems. As a result, in 1992 leading experts from the former GDR helped to found an AWI research centre in Potsdam, which conducts research on e.g. the permafrost regions in Siberia and North America. In 1998 the venerable Biological Institute Helgoland also joined the AWI, adding coastal research in the North Sea to our focus areas.

So, over the years, the perspective has constantly been expanded?

Exactly. Since the 1990s the spotlight has increasingly been on the “Earth system”, the goal being to understand how the land and sea, ice and organisms interact, and how all of these interactions are shaped by human activities. In this regard, climate-related questions have become more and more important: What will happen to the polar regions and the North Sea if climate change produces soaring temperatures? What will the billions of people living in coastal regions around the globe do when the sea level rises? These are pressing questions that we’re working to answer.

Where does the AWI stand today?

It is one of very few organisations in the world that are capable of conducting sustained polar and marine research at the level of a major research institute. As a result, it has also helped give polar and marine research new momentum in Germany: Gotthilf Hempel, the first Director of the AWI, would go on to found not only the Leibniz Centre for Tropical Marine Research in Bremen, but also the Leibniz Institute for Baltic Sea Research in Warnemünde. In addition, many experts who completed their training at the AWI have subsequently assumed leading positions at other oceanographic research centres. The AWI also enjoys an excellent reputation worldwide; as a result, its experts can often be found leading international projects.

One of the most spectacular examples is MOSAiC, the greatest Arctic expedition of all time. From autumn 2019 to autumn 2020, the Polarstern will drift through the Arctic.

Such a massive undertaking never would have been possible without the logistics knowhow and successful past projects over the last few decades. Partners and sponsors alike were confident that the AWI could rise to the challenge – despite all the adversities. And all of the problems created by the coronavirus pandemic have shown just how important this perseverance is. Polar research is often arduous and tedious – as you can see in the recently released AWI chronicle.